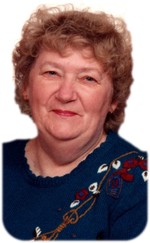 Delores Mae Rezac , was born on July 24, 1931 to Carl and Alta (Gettman) Berggren in Swea City, Iowa. She died Thursday, December 24, 2020 at Lakes Regional Health Care in Spirit Lake at the age of 89 years.

Delores enjoyed going up town for coffee, running the senior center and dancing. She was a member of the Armstrong United Methodist Church and the Weiby- Johnson VFW Post 5232 Auxiliary.

She is preceded in death by her parents, her husband, John in 1998, and her brothers, Walter, Edwin and Marlin Berggren.

All rights reserved. This obituary is also archived at obittree.com