To share your memory on the wall of Jeffrey Juergens, sign in using one of the following options:

Print
Jeffrey Arthur Juergens, son of Arthur “Mitch” and Beverly “Joy” Juergens, was born April 9, 1961 in Lake City, IA. He passed away at his home in Estherville, IA on January 25, 2021.

Jeff attended school in Estherville, IA and graduated from Estherville High School in 1979. He spent his entire professional life as an owner/operator truck driver and landlord. He was united in marriage to Lisa Zitterich on October 10, 1982. Together they welcomed Cory and Kristi. Jeff’s marriage to Lisa was later dissolved.

Jeff loved riding his ATV, whether it be out West at the Grand Canyon or in West Union, IA. He also enjoyed watching the drag races and tinkering on all of his vehicles. When he wasn’t riding his ATV or working on his semi, Jeff thoroughly enjoyed going for a drive about or gathering with his family or close friends at an oriental buffet. Jeff was known as a master negotiator and was always looking for the best price on the things he wanted. He marched to the beat of his own drum and wasn’t afraid to bum someone’s last cigarette.

Jeff is preceded in death by his parents, Mitch and Joy.
Read Less

We encourage you to share your most beloved memories of Jeffrey here, so that the family and other loved ones can always see it. You can upload cherished photographs, or share your favorite stories, and can even comment on those shared by others.

Posted Jan 28, 2021 at 12:18pm
I’m so happy to have met you, Jeff. Honored to share a grandchild with you. You were fun to be around, and will be missed. RIP
Comment Share
Share via:
JS

Posted Jan 27, 2021 at 09:13pm
Jeff it was an honor knowing you. You make me want to be a better man, Father, friend and so many other things. Someone once told me to judge a man by his kids and by that measure few can match Kristi and Cory. I give you my word Amelia will be raised with the same values. Thank you for every my friend. Till we meet again, have a Marb light and a Diet Dew ready for me! Love you Brother!

Posted Jan 27, 2021 at 01:55pm
Connie, Marci, and Families, saddened to hear of Jeff’s passing. You have our deepest sympathy at this difficult time. We were neighbors as we grew up on the southwest side. Richard and Kathryn (Roberts) Dalen
Comment Share
Share via:
KW 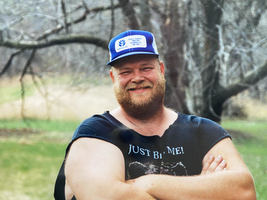