To share your memory on the wall of Helen Brown, sign in using one of the following options:

Print
Helen Mae Brown, the daughter of DeWitt and Lillian (Thompson) Grussing was born April 10, 1930 in Kansas City, Kansas. She died on Thursday, January 28, 2021 at Valley Vue Care Center in Armstrong, Iowa at the age of 90.

She received ... Read More
Helen Mae Brown, the daughter of DeWitt and Lillian (Thompson) Grussing was born April 10, 1930 in Kansas City, Kansas. She died on Thursday, January 28, 2021 at Valley Vue Care Center in Armstrong, Iowa at the age of 90.

She received her education at Venice High School in California. Three days after graduation, she moved with her family to the family farm near Armstrong in Kossuth County.

On September 3, 1950 she was united in marriage to Wilfred Brown in Armstrong. The couple made their home in Armstrong. Wilfred died in 1990.

Over the years Helen worked in Beverly Hills on Rodeo Drive, B&M grocery store, Quaker Oats, the PX on the Marine base, the Shaperal Restaurant, Carlson Photography, and worked on the family farm. She enjoyed traveling, visiting National Parks, sewing, baking, oil painting, wood carving, reading, crocheting, knitting, and all sorts of crafts.

She was a member of the First Presbyterian Church where she was active in the ladies group. Helen also started the Peppy Pals 4-H Club where she was a leader for many years.

We encourage you to share your most beloved memories of Helen here, so that the family and other loved ones can always see it. You can upload cherished photographs, or share your favorite stories, and can even comment on those shared by others.

Love The Berregaards sent flowers to the family of Helen M Brown (Grussing).
Show you care by sending flowers

Love The Berregaards purchased flowers for the family of Helen Brown. Send Flowers 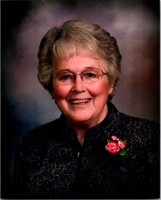